Well, this month is going to seem like all I did was watch movies — which is definitely what it felt like — how did I ever find the time to get any work done?! With covering 2 festivals back-to-back in the month of September for me — Toronto International Film Festival and Urbanworld Film Festival — I saw a lot of great stuff (it was fun, but boy am I tired)…and honestly, Letterboxd didn’t even have all the films I saw listed so I’ll try and slide those in this post as well.

I saw 70+ films (and a few shorts this month) all of which were 1st time watches (that’s definitely a record for me lol). 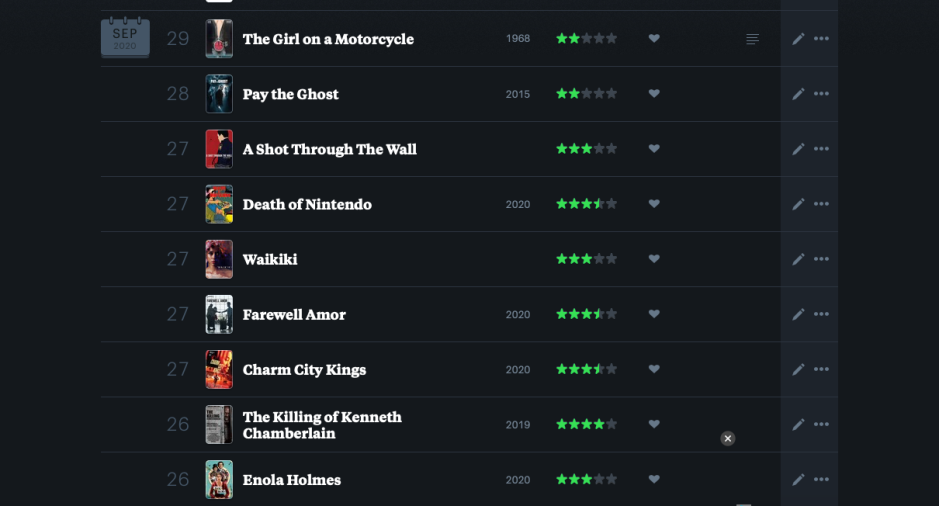 I’ve been on an Alain Delon kick ever since I came across him a couple of months ago on Criterion Channel (they currently have a 12-movie collection of his on there now and I’ve only got one more of those to watch). So I watched “The Girl on a Motorcycle” recently…it was way too trippy for me. I prefer Delon as more of a criminal type or tragic lover…I wasn’t sold on his bookish professor character here lol. And that was my first introduction to Marianne Faithfull…not sure what the fascination is. The pyschodelic scenes were too much and I barely made it through this one SMH.

Make sure to catch the reviews for “Waikiki,” “Charm City Kings,” and “Farewell Amor.” Be on the lookout for “Death of Nintendo” (I really enjoyed this one) and “The Killing of Kenneth Chamberlain.”

I also saw “The Duchess,” the British series on Netflix…it was hilarious…I love these types of comedies! “I’m Thinking of Ending Things” was a little too meta for me LOL…“Enola Holmes” was a fun watch…

And I also saw all the Urbanworld Film Festival films…check out the recap here.

WHAT DID YOU WATCH LAST MONTH???