Thomas Vinterberg‘s “Another Round” may seem like a middle-aged man’s version of a frat film, but in the end it turns out to be a touching celebration of life and holding on to what’s dear to you.

On its surface, this Danish film seems more like a party film about four men who are avoiding responsibility and life by losing themselves in alcohol. We have a feeling that it will end badly because of their irresponsible behavior. We all know about the unfortunate consequences of alcoholism — we’ve seen it countless times before in movies, documentaries, TV shows and in real life. It is all bound to crumble and fall. “Another Round,” while it may seem like it is taking a humorous, lackadaisical approach to a serious, touchy subject, does have a message at its core. 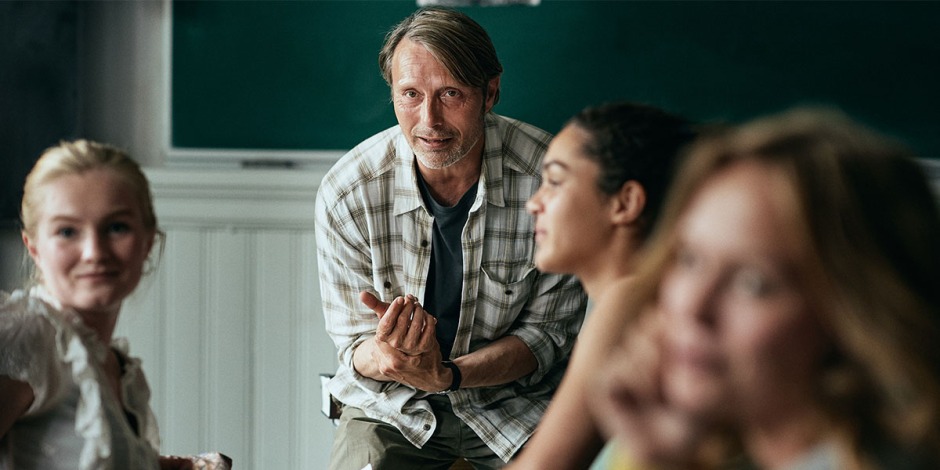 The film revolves around 4 middle-aged teachers (Mads Mikkelsen, Thomas Bo Larsen, Lars Ranthe and Magnus Millang) who are unfulfilled with their lives and current situations — whether its family issues or issues with their love lives or dealing with grief and loss. Looking for a way to escape, they devise a plan to conduct an experiment after reading about a theory — the theory that that we should be born with a small amount of alcohol in our blood, and that modest inebriation opens our minds to the world around us, diminishing our problems and increasing our creativity. But of course to rationalize their actions (drinking on the job), they agree to take notes and monitor their results and behavior like a real scientific study (although there is no control group here so it’s not much of a study). After all, some of the greatest minds and leaders throughout history were always in an alcohol daze (Churchhill and Hemingway anyone?!).

At first, there seems to be something to this theory — things are turning around at work, their students are engaged and they are reconnecting with their families and loved ones — the spark has returned. But we all know this won’t last — things eventually spiral out of control and they have to pick up the tragic pieces. While the film does a great job of showing you that alcohol gives you life, it also shows the flip side of that coin — alcohol can also kill and ruin lives. It’s a balancing act that we must always be conscious of.

“Another Round” may seem reckless with its glorified depiction of teenage drinking (the film opens with the high school seniors participating in the drinking game that the school administration is fully aware of), but before you get up in arms, viewers must remember to keep in mind cultural differences (its legal to buy certain beer, wine and alcohol in Denmark starting at the age of 16). We always have to remember that we can’t always process everything we see through our American lens and rules.

Vinterberg’s film is a multi-faceted story that succeeds in entertaining while also sending a message that should be listened to. The director does an effective job of balancing the fun with the serious. The acting performances are emotional and engaging and really draws us in to these characters and their lives. And Mads Mikkelsen, in his return to Danish cinema, is captivating and a pleasure to watch (especially the final scene where the former dancer gives us a glimpse of his exceptional skills). But even amongst all of the revelry and debauchery, we never loose sight of what’s at the heart of this film — it’s about never losing that spark — that lust for life. Although it may get monotonous or overwhelming at times, each day should be cherish and lived to its fullest. This is the message these four unlikely teachers (both literal and figurative) imparts onto us.