Every few years or so, there is a film that comes out that is based on true horrific events and totally wrecks you. Like “Hotel Rwanda” and others before it, Jasmila Žbanić‘s “Quo Vadis, Aida?” is a devastating look at the 8,372 Bosniak men and boys who were slaughtered in Srebrenica during the Bosnian genocide.

The story is played out through the eyes of Aida (Jasna Ðuričić) an English teacher and translator at the United Nations military base operated by Dutch peacekeepers. As the Serbian army’s approach gets closer and closer to their town, tensions rise as people are forced to flee their homes and find shelter and safety elsewhere. Unfortunately, the UN base can only hold so many people (even though it seems like they could hold more) and the rest of the thousands of townspeople are forced to stay outside of the gates. Aida, inside the gates, realizes that her husband and two sons are stuck on the other side (scenes like this lead one to wonder how films like this will be shot post-COVID). She frantically begins to maneuver and do everything in her power to get her family inside as the atmosphere drastically begins to change. As the Serbian army begins to fatally round up the men and separate the women, Aida is on a fight for survival to protect her family as the unability of the UN forces (hands tied through beaurocratic layers and general ineffectiveness) to save the people is starkly visible. 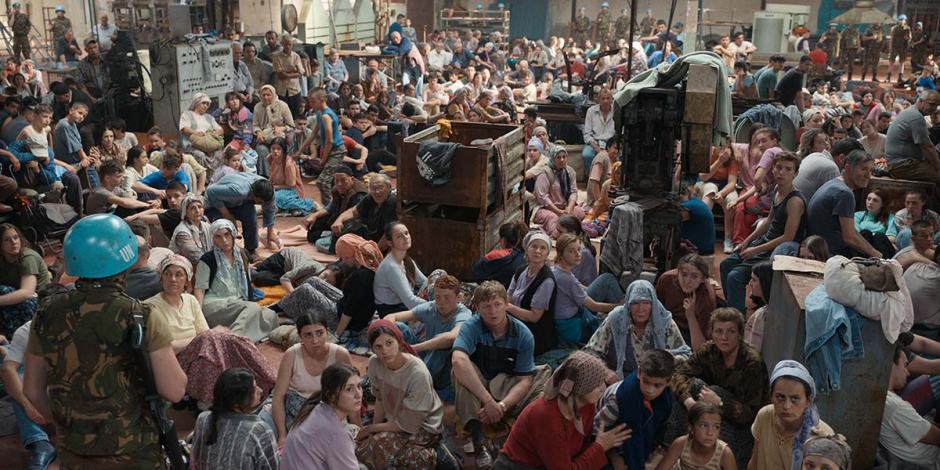 Every minute of director Jasmila Žbanić‘s film is aniexty-filled and frustrating — the unimaginable depravity of humankind is depressing. “Quo Vadis, Aida?” is a gut punch from the very beginning. Aida from the beginning is stuck between a rock and hard place. The cinematography of this film was well-done and served the story well — the exodus images are ones that we’ve seen so many times through history unfortunately, but drives home the devastation and heartbreak of the situation. The UN forces are trying their best but are overwhelmed and not getting the help they need, rendering them utterly powerless. Most of the UN soldiers are just young men and women in over their heads while those higher up the ranks are just lame ducks. Everyone is thrust into a situation in which they don’t know what to do and are just fighting for survival. The tension, waiting and uncertainty are leveled up with the stolen moments of normalcy and the flashbacks to carefree happier times that morph into the somber present day situation. These people are given the option of survival or disappearance.

The film also does a good job of showcasing how oftentimes warlords use propaganda tactics to change the narrative around the situation and the people’s perception of them (the Republika Srpska army commander Ratko Mladić has a film crew that follows him around as he stages scenes…he was later rightfully convicted as a war criminal). As the roundups begin your heart is beating super fast and when Aida’s sons and husbands are finally found out and sequestered, leaving you absolutely wrecked in the end (so have a palate cleanser ready go for after). The acting is so raw and emotional that for the entire 104 minutes you are utterly wrapped up in this world. But in the end, this film is a touching dedication to the 8,372 men and boys who were slaughtered and the mothers, sisters and daughters who were left to carry on so that their story isn’t lost to history.