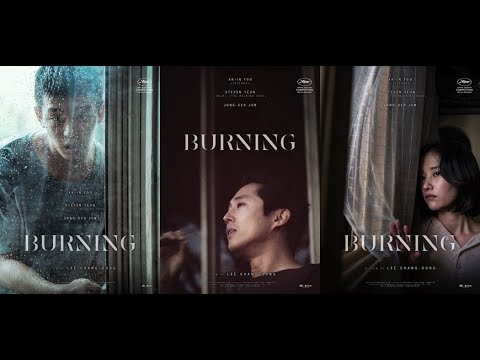 I kept hearing a lot of buzz about this South Korean film (loosely inspired by Faulkner’s 1939 story “Barn Burning”) last year, so this was on my radar and I was happy when it was released on Netflix. I was excited to see Steven Yeun as Ben (I loved Glen on The Walking Dead…they didn’t have to do my boy like that…I’m still traumatized) speaking his native tongue. I thought he was great in this role…definitely Jay Gatsby-esque (love triangle and all) and very mysterious…he has an innocent face and demeanor that hides something much darker behind his eyes and smirk.

But that’s where my praise for this film kinda ends. And maybe I misjudged this one or it completely went over my head (or it could be the fact that I had to break it into 3 separate watching session even though it’s only 2 1/2 hours longs SMH…but I had just gotten back from vacation out of the country and caught cold as soon as I set foot back on American soil so I was drugged up and kept falling asleep and having to constantly rewind…subtitles and cold medicine and a comfy couch don’t really mesh well LOL…the subtitles will lose every time). But I finally made it through and was a little underwhelmed.

I will say that this film did a pretty good job of showing the two sides of South Korea…the rural, more traditional side and the more Westernized, affluent world…both visually and through the characters and Hae-Mi (Jong-seo Jun) trying to traverse both worlds. The characters were real kooky and I couldn’t tell if Lee Jon-su (An-in Yoo) was mentally challenged or just socially awkward…he did some really strange things (but the acting was very raw and good). This film left me with a lot of questions (maybe some of it has to do with cultural differences that may be unknown to me, the foreign viewer?). But by far, the ending was the most baffling to me…and abrupt in my opinion, but it did leave an indelible impression (that’s what good cinema does right?!).

If you’ve seen this one, I’d love to hear your thoughts on it…leave a comment below! If you haven’t seen it, give it a go and let me know what you think! Currently streaming on Netflix.