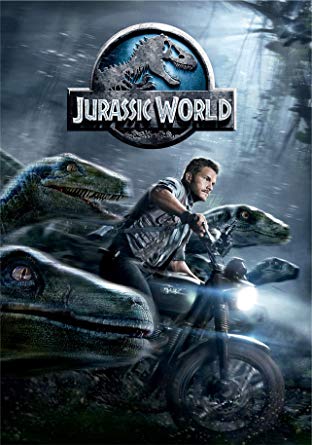 Remember why this place was made, Claire. Jurassic World exists to show us how very small we are. Very new. You can’t put a price on that.

As someone whose childhood dream (one of many LOL) was to be a Paleontologist, I love the Jurassic Park franchise…but when will folks learn to listen to Jeff Goldblum???!!! He’s been telling you for years this ain’t a good idea (he warned y’all in Independence Day, too  LOL). How many people have to die before you listen?!

The dinosaur animatronics/CGI is always good (in my book at least) and I think Chris Pratt was excellently cast…this seemed like a part made for him and he seemed to be enjoying playing the part (I read somewhere that for the Season 2 Parks and Recreation DVD, Pratt made a “behind the scenes” video in which he reads a fake text from Steven Spielberg about being cast in Jurassic Park IV…this was the 4th movie in the franchise and he was cast as the lead LOL). Vincent D’Onofrio was good cast and acting as well…he plays a villain so well (Men in Black anyone?!). It was cool seeing Nick Robinson (Zach) in this…I loved him in Kings of Summer and Love, Simon. His younger brother Gray, played by Ty Simpkins, was great too. And can someone please explain to me how Bryce Dallas Howard was able to run the entire movie…in that environment…in heels???!!! #QTNA.

Overall, I recommend this as a fun escape…but I caution that this should be the final film in the franchise (unfortunately, it was not). Currently available to rent on Amazon Video.

Maybe you should include that in the brochure…eventually one of these things will eat someone.