**This one is slightly different from my shorter, quicker reviews, so be prepared LOL**

Netflix’s original drama “Irreplaceable You” is a heartwarming mix of tragic terminal-illness romance, humor and buddy film. At its core, this 96-minute love story teaches us about life and saying goodbye through unexpected friendships and expertly uses color and lighting (blue hues, muted neutral tones and shimmering sunlight) to convey and enhance the mood of the scenes against the beautiful NYC backdrop.

The feature film directorial debut of Stephanie Laing (“Banshee” & “Veep” Producer), Irreplaceable You tells the story of childhood sweethearts Abbie and Sam whose fairytale romance is turned upside down after a doctor’s appointment.  “Irreplaceable You” opens with a voiceover narration that fast-forwards to the end of the story (Abbie’s story in particular), when we’re told that this is where everyone’s story ends, a cemetery. We are then transported back in time to the beginning of Abbie and Sam’s love story at age of 8 where we get our first glimpse of Sam and Abbie’s personalities. While listening to a story about the only monogamous fish sinking their teeth into their mate for life, Abbie does the same to her soul mate Sam leading to a cute “how did you guys meet” story.

The budding romance through the years is then played out through a beautiful, joy-filled montage in which the couple progresses to modern day. Having been together for so long, Sam and Abbie are almost sickeningly sweet and Abbie’s Type A personality is perfect for Sam’s nerdy, handsome “absent-minded professor”. The happy couple are expertly played by Gugu Mbatha-Raw (“Belle” & “Beyond the Lights”) and Michiel Huisman (“The Age of Adeline” & “Game of Thrones”). The chemistry between these two was so natural and believable…you really believe that they care deeply for one another and would do anything to make sure that the other was happy. This was a perfect casting as Mbatha-Raw was very believable as the Type-A, plan for everything and overprotective Abbie. And the versatile Huisman is adorable as the clueless and hapless geeky Sam who will be “eaten alive” by the wrong woman once Abby is gone.

After her prognosis, Abbie reluctantly joins a support (crochet) group to help come to terms with the inevitable future. The group is a wonderful hodgepodge of funny side characters, including Steve Coogan as the group leader, Kate McKinnon as “Glass Half Full Kate” and Tami Sagher as the weirdly depressing Meryl who help Abbie along her journey. But Abbie ends up forming an unexpected friendship with the elderly Myron, brilliantly played by Christopher Walken who teaches her valuable life lessons.

One day in passing, Myron mentions that he hopes his wife Estelle will find a nice man to replace him after he’s gone and that sends Abbie on an ill-fated mission to “change” and prepare Sam so that he finds the right girl to replace her once she’s gone. While Abbie is on her mission, the film shows the ups and downs of their relationship and we get to see the effortlessly cool and much needed “therapy session” friendship between Benji (effortlessly played by Brian Tyree Henry who’s always great) and Sam.  Huisman, Henry and Walken are definitely the highlights of this film. The “reception” scene will really touch you and teach you that even though it may be hard to say goodbye, sometimes you just have to let go. 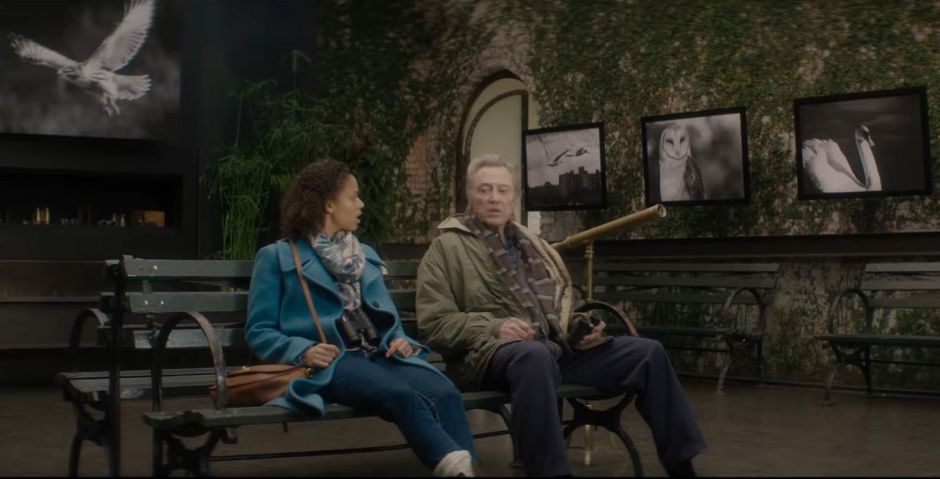 Essentially, this cute love story is about the things we do we for the people we love and the lengths we would go to make sure they are loved and cared for once we’re gone. In the end, this film reminds us that while we’re “trying to predict the ‘what if’s’, we miss out on the good parts…the ‘what is’.” The supporting cast brings levity and humor to such a depressing situation that isn’t quite enough to make it a dark comedy. A great mix of humor (i.e. Abbie’s assistant, her treatment suite nurse Dominic and the many “too soon?!” moments), romance, drama and a little bit of introspection makes for a cute little movie that’s worth a watch on a lazy Sunday afternoon.