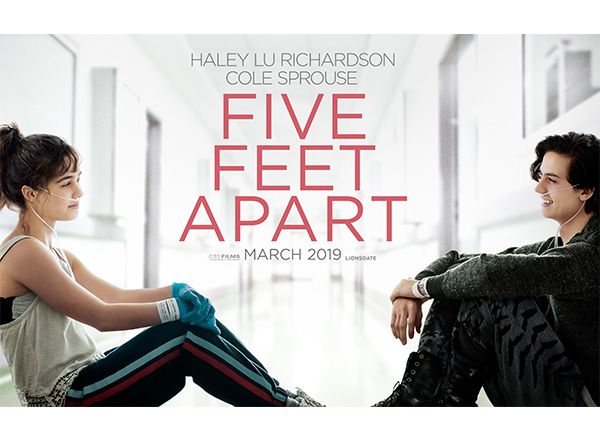 When life keeps you apart, fight for every inch.

I’m going to be brutally honest…The Fault in Our Stars it was not…but it tried, I guess. Keeping it 100 here, TFIOS will forever be the “gold standard” of terminal-illness related YA love stories and everything that comes after it will be judged against it (fair or not, just being honest).

I will say that the director (Justin Baldoni of Jane the Virgin fame) and cast gave it a decent attempt, but it just seemed like the storyline was kinda stale and predictable. It was cool that the film shed light on an illness that not many people understand, cystic fibrosis and the actors and director worked closely to assure accuracy with it’s depiction in the film. I will give Haley Lu Richardson all the credit she deserves because I think she delivered a great performance. It was also fun seeing Moises Arias again…he was one of my favorite parts of The Kings of Summer! And I don’t want the teen fanbase to come after me, but I’m still on the fence about Cole Sprouse’s acting abilities…he’s not horrible, but he’s not great either. His character just reminded me of his Jughead character on Riverdale (full disclosure: I’m still on the 1st season so I could be totally wrong…that’s just what I see so far). But the film did have everyone sniffling at the end–even me (but remember it doesn’t take much to make me tear up lol).

Overall though, I’d say if you have a choice and haven’t seen The Fault in Our Stars, watch that instead…and if you’ve seen it before, watch it again…it’s a better movie. Too harsh??? What’d you guys think of Five Feet Apart?

Aside: I’ve learned my lesson…I can no longer see these types of YA movies in the theatre…it was just a room full of teenage girls who whispered and talked throughout the entire film…that’s super annoying!