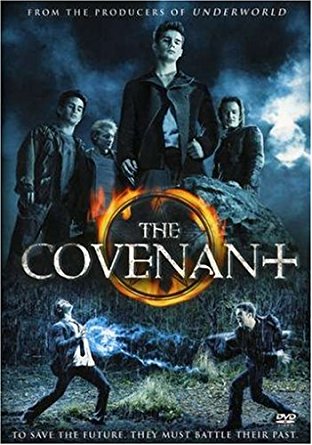 Its not every day you see a movie about male witches (Warlocks, sorry). I only watched this for Sebastian Stan (I love him as Buckey/Winter Soldier in the Marvel films…he was great in I, Tonya as well…so I wanted to see more of his work). I think this may be pre-Gossip Girl for him…when he was still just a baby face…and his fellow GG co-car Chance Crawford was also in this film. Even though this was released almost 20 years after The Lost Boys, the special effects were better in the ’80s movie smh.

A movie about four best friends in the same coven who have to protect themselves when a new young warlock with a devious plan comes to town…I’m still a little confused by the story line and the motivations for some of the characters, but I can say that Sebastian plays a crazy, bad guy very well. Produced by the same guys as Underworld: Evolution, which I really liked, I thought that this might be on the same level, but since it was geared more towards the teen/younger crowd, it wasn’t quite as up to par (maybe if I had seen it back in ’06 when I was in my early 20’s I would’ve felt differently). The CGI and visual effects were iffy, the acting was sometimes over the top and the plot had some loopholes in my opinion. Overall, if I were you, I’d give this one a hard pass.