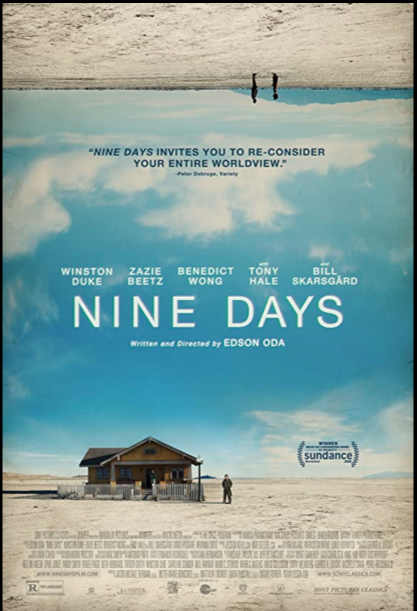 If you had to prove that you were worthy of life, could you? Do you only see the bad and gloss over the beauty in the small things in life? This is what writer/director Edson Oda asks in his new feature “Nine Days” which screened at AFI Fest 2020. Drawing inspiration from his uncle’s suicide, Edson’s story revolves around Will (Winston Duke) who is an interviewer in this sci-fi adjacent world in which “souls” have to prove they are worthy of being given the opportunity of living. Will has the desolate and heavy duty of choosing who gets a chance at life while also keeping track of the lives he has already granted.

One day while monitoring those lives on the old-school VHS and TV sets in a remote outpost, Will witnesses the death of one of his most promising subjects, Amanda. With this death, there is a new “vacancy” that he must fill so he embarks on a 9-day interview process with several unborn souls who must pass his test for the coveted spot or else they cease to exist. While administering this interview process with the help of his “quality control manager” Kyo (Benedict Wong — the two Marvel actors team up again), Will is consumed with trying to understand Amanda’s death. Trying to understand where he went wrong with choosing Amanda, he looses sight of himself and the true meaning and beauty in life.

As we go through the 9-day weeding out process, we get a glimpse of the different personalities and approaches to living by the different interviewees — from the cynical to the soft and everything in between. As they drop one by one, one of the interviewees Emma (Zazie Beetz), who sees the beauty in all the small things in life, starts to have an effect on Will. She’s unique and so unlike the others in the way she really wants to savor the act of living. This grates against Will’s more stoic and tough demeanor. The way she approaches life is juxtaposed to Will’s in every way — Will is very disillusioned by life and talks as if these new souls are going into battle because life is hard and you must be strong and tough to survive (we learn that Will was once alive and his experience colors his outlook on life). On the other hand, Emma is just taking it all in (through the POV of the living souls they observe) — the good and the bad but not seeing it in black and white, it’s just “all is.” But Emma sees that there is something still left in Will — something that still feels — and she hopes that he will find that in himself again.

There are some other memorable potential souls along the way including Kane (Bill Skarsgard), Alexander (Tony Hale) and Mike (David Rsydahl). Their journeys and discovery are very telling and insightful. Once a soul is eliminated from the process, they are given the opportunity to “live out” one particular moment or memory that they observed — and those moments are so touching and emotional — it really gets one thinking about how we take so much for granted. Each character really draws us in and we feel connected to them — we can relate to all of the different ways they see life.

“Nine Days” is filled with a lot of tough, somber moments — like the emotional scene between Will and Alexander. The film makes you confront the way you live and experience the world — you can choose to only see the bad — or you can choose to see the good in the world. It doesn’t have to be the “strong” against the soft or emotional — why can’t we be both. But it’s understandable that sometimes the pain of the bad doesn’t allow you to see the good, but we can’t let that consume us.

Beetz, Skarsgard, Hale, Wong and Rsydahl all deliver subtle, yet impactful performances filled with nuance and emotion. There is a depth to their portrayals, especially Rsydahl and Beetz. Duke on the other hand felt somewhat more one-note — he had a scowl through the entirety of the movie that made it hard to really connect with his character. His performance seemed a little stiff and forced (maybe it was just his character choice…who knows). But the surrounding cast more than make up for that.

To bring it all together in a cohesive and beautiful ode to life, Oda and team created a provocative film that takes you on a journey and twists your perceptions of suicide, memory and life in general. The film begs the question — what does it mean to be alive? Through the wonderful and exquisite cinematography (Wyatt Garfield), detailed world-building and the beautiful moving score, we learn to be in the moment. “Nine Days” shows us the poetry of life — the pain and the beauty — the highs and the lows and urges us to live each day with a newfound sense of awareness.