With Woodstock celebrating it’s 50th anniversary this year, Woodstock or Bust is a fitting tribute trip back to the bygone era of the late 1960s. From the lava lamp imposed over actual scenes from the ’60s in the opening credits until the very last scene, viewers get lost in that funky, psychedelic feel of the time with an inspiring message to boot. This indie film opens up with a montage of ignored performances of two teenage performers (Meryl and Lorian) at some less than ideal gigs, setting up the premise of two artists whose craft isn’t taken serious. So the two young ladies come up with a brilliant idea and embark on an epic road trip to try and get on stage at Woodstock.  With all your classic road trip and teenage best friend tropes (eg. hitchhikers, jealousy, boy problems, runaways, drugs and alcohol, cops and jailhouse bonding)…maybe one too many. But the film definitely has a “Thelma and Louise” feel to it, with Meryl being the more straight-laced talent of the group and Lorian as the more wild child in search of adventure and excitement.

The film also tries to get in some seriousness by touching on a lot of the major societal issues of the time, which sometimes kind of seems like it out of left field and just trying too hard. The Vietnam War looms heavy throughout the movie with it being a central focal point with a few of the hitchhikers they come across. There are also some scenes that came across as “forced social consciousness” on the MLK/Kennedy assassinations and legacy, the Draft and various other political outcries. The film also touches on sexual assault, dealing with pain and loss and teenage/underage drug use. While some of the scenes seem a little over the top and unnecessary, there are a few heartfelt moments that make this film worthwhile. 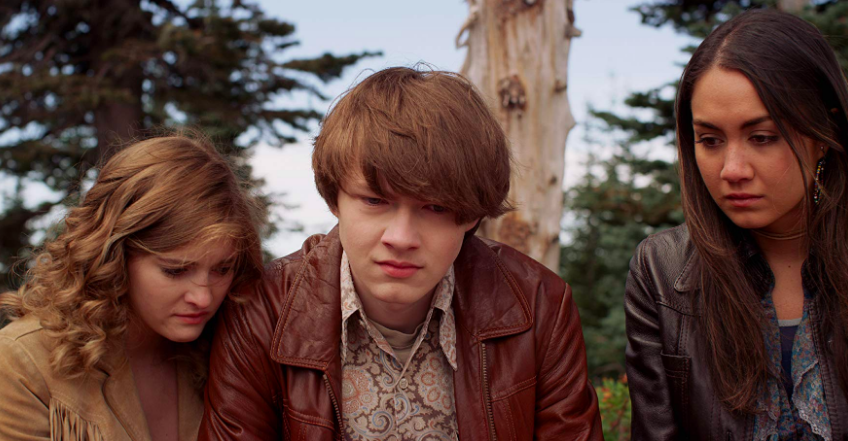 Starring Meg DeLacy from The Fosters and The Hunger Game’s Willow Shields, the two leads do a great job of carrying the film and really seem to be enjoying themselves. Shields was great as the fun-loving, carefree but supportive friend, although she had her faults. Teddy Van Ee as “Nick” also gave a great performance as a young adolescent looking for an escape.  There were some very touching moments of truth and bonding that really worked. All the characters seemed really relatable and one could really connect with their story of chasing their dreams.

Acting aside, there were some elements of the film that could’ve used a little help. There were lots of fun, groovy montages (fitting for a late ’60s film) and great editing. But there were also a lot of scenes that could have been trimmed because they didn’t really add much to the storyline. And other scenes just ran too long…it seemed like they were trying throw the kitchen sink in, but it just made the film feel a little random and all over the place. But on the other hand, there were some beautiful scenic shots throughout the film. There were also some weird music choices in some scenes (eg. right after the Martin/beach scene) and odd slo-mo usage. Although the costuming (just really looked like some teens played dress-up in a thrift store) and overall feel (really just felt like a 2000s indie film) of the film didn’t look or feel very ’69, but the set design and cars nailed the vibe.

Overall, this was a cute little movie with a little nostalgia thrown in. So whether you’re a former flower child and want to relive some of your teenage years or a current teenager needing a little encouragement to follow your dreams no matter the obstacles, this is a fun watch.

Woodstock or Bust is currently streaming on the following streaming platforms: DirecTV, inDemand, Amazon, iTunes, Vimeo on Demand, Vudu, FANDANGO, Hoopla, AT&T, FlixFling, Google Play and Sling/Dish. Give it a watch and let me know what you think! Stay groovy!