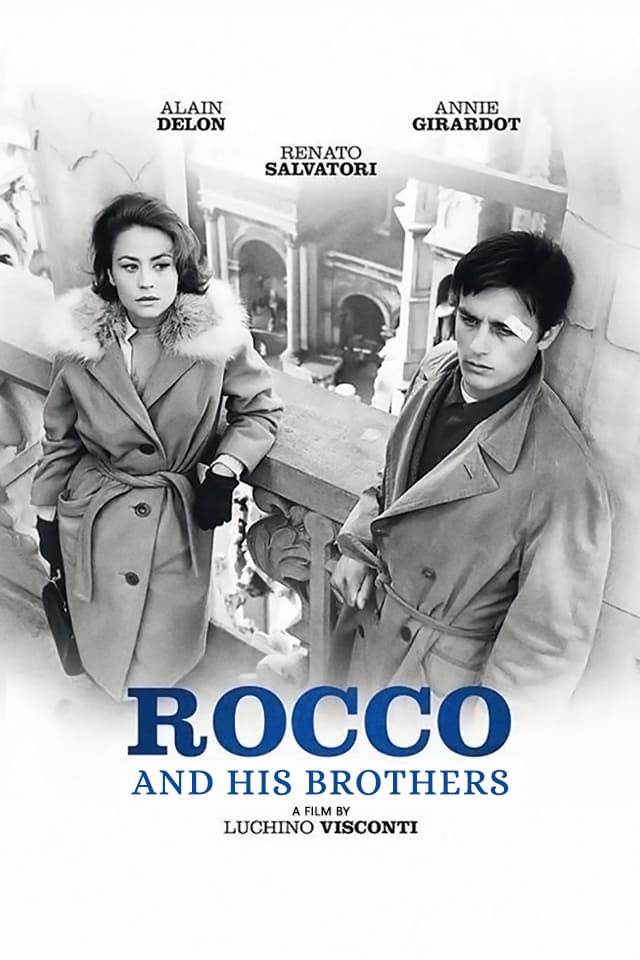 Brothers or not, we’re seeds taken from the same sack meant to bear fruit. A seed gone bad must be weeded out. Just like when we cleaned lentils.

I had never heard of French actor Alain Delon until I was reading an article about the controversy surrounding him being awarded with an honorary  Palme d’Or at this year’s Cannes Film Festival. So I figured I’d check out some of his work…and what better place to do so than Criterion Channel (I knew they wouldn’t let me down…they’ve got a good rotation of foreign classics!)

I started my Delon journey with Rocco and His Brothers (or Rocco e i sue fratelli) having no concrete expectations…really had no idea what I was getting into. But I must say, I really enjoyed this film!

Shot in black and white (my fave as you know), this film revolves around 5 brothers (and their mother) who move to Milan form the countryside to improve their lot in life. It tells the story of their struggle from the “bottom to the top” and the love triangle between 2 of the bothers (Rocco and Simone) and a “lady of the night” that ends tragically. I loved how the film was essentially broken up into segments focused on each of the brothers individually and how they played in to the conflict.

At it’s core, this film deals with family (putting family first…even above your own happiness), love (you can’t help who you love and the transformative power of it…from the right person, it can open your eyes and change you for the better), jealousy, forgiveness, desperation, second chances, classism, gender issues, sacrifice, feminism and autonomy, overcoming your past but never forgetting where you came from, modernism, etc. It dealt with a lot of issues that were current at the time (1950s/60s) and still relevant today.

You helped me understand the life I led was horrible. I learned to love you. And now, because of the brutality of a louse, who humiliated me in front of you to bring us to his level, all of a sudden nothing is the same. What was beautiful and right has become wrong.

There were great, grounded performances by all involved, especially Delon (“Rocco”), Renato Salvatori (“Simone”) and Annie Giradot (“Nadia”). The mother, played by Katina Paxinou, came through as a traditional, stereotypical Italian mother. Rocco’s character had me torn…his innocence and dedication to his family was at times maddening but admirable. The family dynamics came across authentically on screen. Visually, this was interesting to watch…well-shot…the beauty was in the details. Raw and emotional, this film was definitely unforgetable. Overall, I thoroughly enjoyed this Italian-language film (fun fact: most of the actors voices were dubbed in Italian) and highly recommend (Martin Scorsese does too…he put it on his list of “39 movies you must see before you die”) it if you love foreign films, classic movies, great performances, good stories or are just a huge movie fan in general.