These might be the funniest movies…well documentaries (it was like watching a Documentary Now! episode LOL)…I’ve seen in a minute! Don’t get me wrong, what happened was definitely wrong (and illegal) and could’ve ended a lot worse AND CLEARLY Billy has some mental issues (coupled with a serious case of “privilege” smh). But it was fun to see a “shit show” unfold. It kinda reminded me of watching Downfall (and seeing Hitler lose his shit and be in complete denial in his last day but try and finish through with what he started even when people were telling him it wasn’t going to work and they needed to cut their losses…), not equating Billy to Hitler though…just saying I could see the psychological similarities LOL.

I remember being on social media and seeing the promo videos for the Festival and thinking it was gonna be dope (I was kinda their target demo since I’m a Millennial, but their marketing was geared more towards males in my opinion…but thinking I can’t afford this…this is for privileged, rich white kids” LOL). I also remember then seeing the “infamous” cheese sandwich Instagram post and just laughing hysterically at the irony…and then I promptly forgot about the Fyre Festival…until these two documentaries were all over social media and one of my co-workers asked if I had watched them yet. 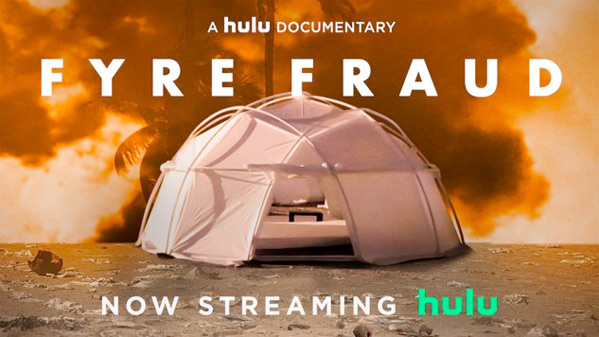 Some folks have preference, but honestly I enjoyed both versions of “the truth”…Netflix’s Fyre: The Greatest Party That Never Happened and Hulu‘s Frye Fraud. Both versions gave slightly different perspectives or rather focused on different elements, but both kind of showed that Billy was cuckoo when it came to this festival (some say that Netflix’s version was more biased since it was produced by Fuck Jerry Media and they were trying to lessen their liability which is a valid observation). I will say thought, that Netflix’s version has that one part that I will never forget….

You are our gay, fearless leader…and you need to take one for the team…

Hulu’s version had these really weird interviews with Billy & his girlfriend that I could’ve done without. And I must say that the Bahamian guy was hilarious!

Overall, I thought there were two well done documentaries that were well-shot/edited and had some great interviews that end the end were a strong case study in sociopathy and privilege. I highly recommend watching both the get the “full” story.