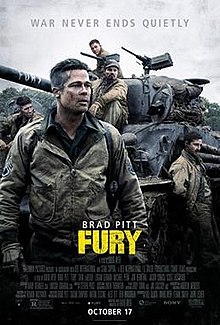 So some of you may have noticed…or will going forward, that I have a fascination with WWII movies (WWI as well) and the lead up and aftermath…the global scale, psychology, lasting impacts, depravity and motivations of all the participants are utterly fascinating (in a sheer curiosity way) to me…but also the stories of hope, rebellion, resistance, love and overcoming the direst of odds. So you’ll notice a lot of reviews for movies, series and docs that deal with them (but I’ll try to space out the depravity and mass destruction).

Fury is a well-shot, well-acted film about a fresh-faced soldier thrown in with a bunch of hardened, seasoned soldiers…war and the atrocities of war can really change a person. It’s a story about trying to shape a “newbie” into a “real soldier” who will do whats necessary to win and survive. There were times where Jon Bernthal and Michael Pena‘s characters really got under my skin and made me wonder why they acted the way they did (especially when they were in the house with the two French girls). But I guess when you’re surrounded by such evil, destruction and heinous, questionable behavior day-in and day-out, you might slowly use your humanity…to steal a quote from the German series Generation War, “this war will bring out the worst in us”. Brad Pitt‘s character kinda reminded me of his Inglorious Basterds character (maybe it was just the accent).

Jon Bernthal gave a stellar performance…I feel like he plays characters who teeter on the borderline of being pyschopathic really well. Fresh-faced, naive Norman who has to toughen up real fast was well-played by Logan Lerman. By far the highlight of this film was the tank standoff by Pitt and his men. The cinematography was great as well as the sound editing and acting by the main characters. If you’re looking for a war movie, this is not a bad one to watch. Currently available to rent on Amazon Prime Video.