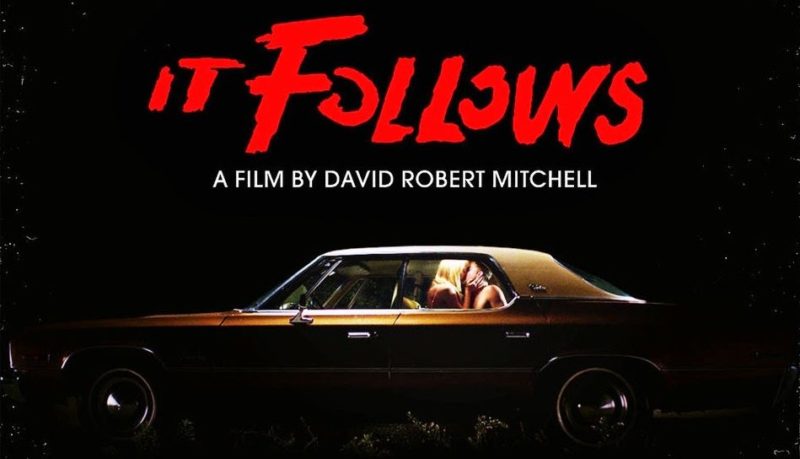 Brainchild of writer/director David Robert Mitchell, It Follows is yet another horror film morality story but with a slightly more fresh, intellectual take.

It Follows “follows” Jay (played by Maika Monroe) and the nightmarish consequences of a random sexual tryst. The film opens with the carefree 19-year-old Jay gearing up for her sexual encounter with the mysterious Hugh/Jeff (Jake Weary). After the deed is done, Hugh lets her in on a little secret…he’s passed along a deadly curse to her that she can only get rid of by passing it along to the next unsuspecting victim…what follows is a painstaking hour and twenty minutes trying to get rid of the curse. It is a clever, new take on the “morality play” that tries to teach us (teens and girls in particular, it seems) that sex (or the consequences thereof) and the decisions we make will haunt or follow us forever. It’s the same lesson that almost every horror film tries to teach us… “sex is bad and it’ll kill you.”

The film has a very old school horror film vibe to it with the cinematography (the use of shadows and lighting, tracking shots and lots of outdoor scenes) and a synth-heavy retro score that evokes an ‘80s slasher film (a la Halloween and Friday the 13th) feel to it. But It Follows is not nearly as scary as those old school horror films.  Although you could really sense Monroe’s terror and see her slowly come undone and then gradually regain herself, the movie itself was not scary at all. The rest of the cast was forgettable and the film never really gave any real back story on the group of friend’s relationships, nor did you really get a sense of the relationship between Jay and her siblings. The one “sidekick” who kind of stood out was Keir Gilchrist’s Paul, who is Jay’s weird friend who’s clearly in love with her and “willing to take one for the team” to save her. It seems Gilchrist has a knack for playing weird/borderline creepy friends (e.g. Heartthrob).

But Monroe’s acting and the “fresh” take on a tired cautionary tale aren’t enough to save this low-budget feel “public service announcement”. The dialogue and backstory on the curse were severely lacking (how did Hugh know so much about the curse?). It Follows will leave viewers with more questions than answers…the logic of the film’s world isn’t consistent (the rules surrounding “It” and how the curse works and manifests). Some of the decisions and choices that the group of friends made were kind of baffling and made no sense (as well as some of the more random scenes). It Follows drags on a little too long and is a little too abstract. Sure, it works for a “modern” horror film (because reality and real life are much scarier than fictional boogeymen and monsters), but if you’re looking for a scary movie, this ain’t it. Currently streaming on IMDB Freedive.