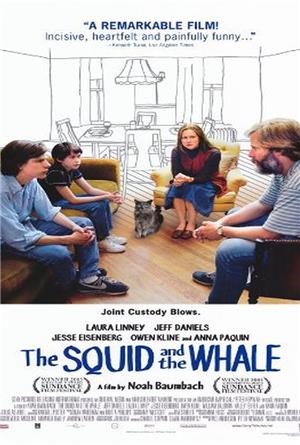 I was listening to a podcast the other day and the guest made the comment that Noah Baumbach’s “Marriage Story” (2019) is the same movie as his “The Squid and the Whale” but the latter was better. Having seen “Marriage Story” (I thought it was ok but slightly overrated), I was interested in watching this one since it had been in my queue on Amazon for a while. And I must agree that liked this one better. Don’t get me wrong, Adam Driver, Scarlett Johansson and Laura Dern gave stellar performances but i felt overall, “The Squid and the Whale” was a little more compelling…but damn if it wasn’t essentially the same story…young kids dealing with the contentious divorce of their parents.

Starring Jeff Daniels as the douchebag father, Bernard and Laura Linney as the overlooked-but-finally-coming-into-her-own mother, Joan. The boys, teenage Walt (Jesse Eisenberg) and younger Frank (Owen Kline) are trying to cope during the separation and split of visitation time between the parents. Walt is infatuated with his author-turned-professor father (who hasn’t really written anything of note in years) and tries to emulate him at every turn which just turns him into a younger douchebag (a role Eisenberg plays well) when it comes to women. Frank is more inclined to his mother but both boys seem to be affected emotionally and mentally by the separation.

With wonderful, compelling performances grounded in reality and a subject matter that is super relatable, “The Squid and the Whale” is an enjoyable watch although it really makes you dislike Daniels and Eisenberg’s characters…just toxic masculinity and chauvinism at its realist. Sometimes its uncomfortable and painful to watch and you really feel for the boys. But overall, well worth the watch and a solid film by Baumbach. Currently streaming on Amazon Prime.